THE SWORD OF MABRY

None of it could stop local bladesmith Gabriel Mabry.

Despite being the least experienced of the four smiths to compete on History’s hit TV show “Forged in Fire” last week, Mabry — who operates a forge in the Norwood area — pounded through three rounds of challenges to claim the title of champion during the episode.

“It went better than I could have asked for,” Mabry reflected.

Whether using pieces of a rusted car to forge a Bowie-style chef’s knife in the first round, or crafting a 22-inch yatagan (a short saber used by soldiers of the Ottoman Empire) in the last round, Mabry’s skills found themselves up to the task.

“Nothing was too far out of my comfort zone, which was a little lucky,” Mabry said, noting that the competition is known for radical challenges. “They’ve had some pretty crazy stuff on there, but this was everything I had skills for.”

Even the car he and the other competitors pulled metal from in the first round turned out to be a blessing, he added. The leaf springs on the car were very similar to the bar steel traditionally used to forge blades, he noted.

“After that, it was largely a matter of time management,” Mabry said.

And Mabry’s always had a knack for that.

A former professional chef trained at Johnson and Wales in Charlotte, he’s juggled meticulous tasks and finicky recipes in the heat of the kitchen for years.

“Time management was built into me,” Mabry said. “Which I think became one of my biggest advantages on the show.”

Marked by judges as one of the most even-keeled contestants they have ever had, it was clear Mabry had no problem keeping cool in the blazing competition. But that didn’t mean he wasn’t breaking a sweat now and then.

During the final round of competition, Mabry admitted, he had some major concerns about his yatagan. The signature “dumbo-ear” handle on the blade was not reinforced with metal the way the traditional weapons were.

“I was afraid it would crack,” Mabry said. “Or one of those things would go flying off.”

In fact, the handle on the other finalist’s blade did crack during the show’s final testing phase, giving Mabry a major advantage.

“It was bittersweet watching (that),” Mabry said. “It gave me some wiggle room… but our blades were constructed so similarly, same shape, same weight, same method (for attaching the handle)… it would have been good to see how they really measured up.”

As for the other most intimidating factor of the show, it had nothing to do with the competition, in Mabry’s opinion.

After each new challenge, he elaborated, staff had contestants do up to seven hours worth of interviews at a time.

“That was just plain exhausting,” Mabry said. “It was the most pain-staking process I’ve been through… After a while you just don’t know what to say anymore.”

However, despite some nerves about how that would play out on camera, watching the episode turned out to be a blast. Not only did the episode do a good job of catching his quirky personality, he noted, but it also caught the attention of an awful lot of people.

The night the episode aired, about 50 people came out to a viewing party at Little Tokyo.

“We had an RSVP for 30, but people just kept coming in all night,” Mabry said.

Some were familiar faces, but others were strangers. One man Mabry never met pitched in money to get the crowd a sushi boat.

“It was something else. They were all whooping and hollering,” Mabry said. “You couldn’t even hear what was going on sometimes. I had to go home and rewatch the episode the next day just to catch what people were saying.”

The hype didn’t slow down much the next week, either. Within 24 hours, his business — Doberman Forge — had 3,000 Facebook hits and 1,000 website visits, and emails coming in from across the country.

By the end of the week, about a dozen orders had come in, three times his previous high for a week.

“And most were for high-end blades, Damascus steel, good size,” Mabry said.

In fact, one of the show’s producers purchased a Japanese-style kitchen knife from Mabry after the show.

“It was a privilege to receive that order,” Mabry said.

As for the blades he made on the show itself, they remain the property of History. His final blades could go on a display wall on the set, Mabry noted.

He may not get to keep his blade, but he will receive a $10,000 prize, he said. And he already has plans to upgrade his shop with new power equipment with the money.

“Right now, I shape everything by hand, which is time consuming,” Mabry said. “I love it, but I think that’s the next step.”

In addition, Mabry’s “Forged in Fire” journey may not be over yet.

As a winner on the show, he’s eligible for both a champion and judges’ pick episode. If he gets enough support from viewers, he could make it onto a fan favorite edition as well.

“I really hope I do get on there again,” Mabry said. “I’d love to have another crack at it.” 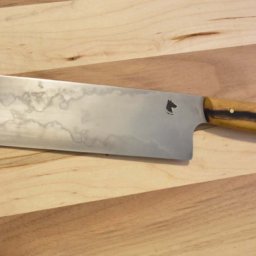 The following video is of Two Damascus orders needing filled: Full tang Chef, and Slicer for separate clients.  The damascus…

I will be exhibiting for the 2nd year at Blade show 2019 located in Atlanta Georgia at the Cobb Galleria!… 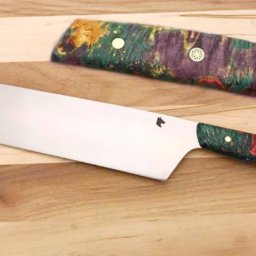